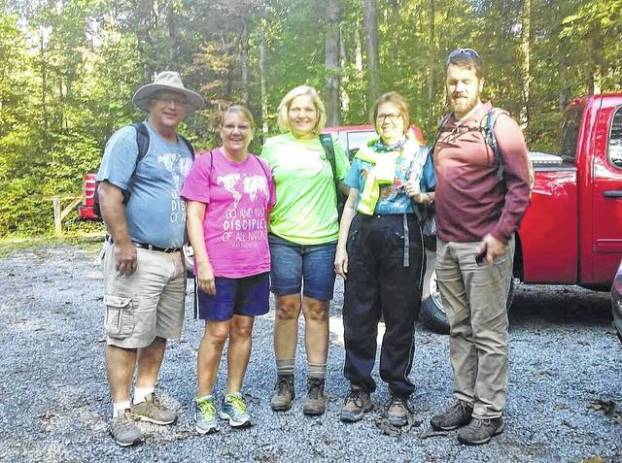 “I always say it’s my least favorite trail at Cumberland Gap National Park due to its intensity, but I keep doing it so I must really enjoy the view from the top,” said park ranger and head naturalist Keith Bowling.

Since beginning the hiking series in March, over 31 miles have been covered, with the park hosting a new, exciting hike once each month.

Chadwell Gap Trail was the longest one of the series, averaging out at about eight miles all together. Complete with several steep slopes and an exceptionally swift elevation change of 2,247 feet, the trail has been rated ‘difficult’ by professionals.

Despite the rough climb up the mountain, most who have experienced the trail for themselves say it’s worth all of it for the alluring view it provides. Once at the top, hikers were able to enjoy the highly praised view from the crest of Cumberland Mountain as well as meander inside Hensley Settlement, one of the most historical settlements of the region.

Hensley Settlement was a once-successful mountain community established by Sherman Hensley in 1901. The historic community remains standing and is open to tours for any visitors who would like to explore the area and get a sense of what life may have been like for settlers of the early twentieth century.

Participating in the fulfilling exposition were several staff members of Clear Creek Bible College. The crew decided to take a break from the classrooms and books for a day to endure a strenuous adventure in the great outdoors, and- according to them — it was well worth it.

“The trip was wonderful. It was an intense grind to the top of the mountain, but was absolutely worth it,” said Michael DeLand, director of college relations at Clear Creek. “The peacefulness of the forest on the way up combined with the tranquil settlement was a real joy to experience. It is surreal when you realize that an entire community lived up there. I will definitely go back.”

The series has included hikes from several different places across the area, such as: Kentucky State Nature Preserve, EKU research property and National Park land. Each hike was within 70 miles of the series’ host, Pine Mountain State Resort Park.

Transportation for the first 10 people registered — as well as lunch options for the more strenuous hikes- were made available for participants.

While other hikes in the series required a reasonable fee of $10 per hike- or $35 for registration for all of the hikes — in spirit of it being the last one of the year, the hike up Chadwell Gap Trail was made free for anyone who wished to participate.

The park plans to continue its Hike-A-Thon series next year and rangers are currently taking suggestions for new and exciting hikes to include.

“This series has been a lot of fun. We have met some nice people and visited some really cool venues,” said Bowling. “We look forward to even more adventures next year.”