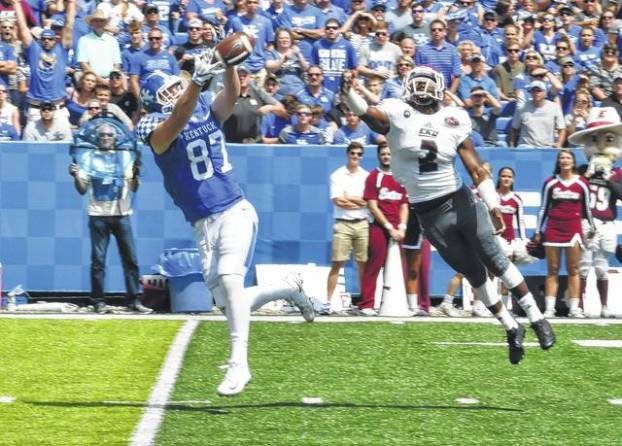 C.J. Conrad hauls in a catch during Kentucky’s victory over EKU. The Cats will travel to South Carolina for an important SEC East match-up against the Gamecocks on Saturday.

Allen-Williams, a senior, has sat through three losses to the Wildcats and hopes to put an end to that run when South Carolina (2-0, 1-0 Southeastern Conference ) squares off against Kentucky (2-0) on Saturday night.

Before the recent woes, South Carolina had little trouble with Kentucky since joining the SEC in 1992. The Gamecocks had gone 17-7-1 against the Wildcats, including a 10-game win streak from 2000-09 that started under coach Lou Holtz and continued with Steve Spurrier in charge.

Kentucky’s run began with a fourth-quarter rally when Allen-Williams was a freshman.

It’s something that’s bothered him and the other South Carolina seniors.

“I told the guys in the locker room after the last ballgame, our seniors haven’t beaten these guys,” Gamecocks coach Will Muschamp said. “That’s not something we need to allow to happen.”

Kentucky believes it can extend the hold its had on the Gamecocks the past few years. The Wildcats have run for over 200 yards in each of the wins. Tailback Benny Snell bruised his ribs in last week’s win over Eastern Kentucky, but is expected to play.

Kentucky defensive end Denzil Ware said the Wildcats have been motivated and ready to battle South Carolina the past three meetings.

“The main thing is we were fired up and ready to play,” he said. “The last time we were there we hadn’t won a road game in like 80 years.”

The Wildcats 26-22 win at Williams-Brice Stadium two years ago broke a six-year string of futility on the road.

Some other things to watch when Kentucky plays at South Carolina:

THREE-BO? South Carolina receiver Deebo Samuel is seeking his third straight game with a kickoff return touchdown. Samuel took the opening kickoff 97 yards for a TD against North Carolina State two weeks ago, then went 97 yards against Missouri to start the Gamecocks scoring. Samuel also returned a kickoff for a score against Western Carolina last season, giving him three such TDs in the Gamecocks past five games.

WILDCATS QB: Kentucky appeared to ignite a quarterback controversy by replacing Stephen Johnson with former starter Drew Barker in the second quarter against Eastern Kentucky. Both Johnson and coach Mark Stoops insisted that was a planned move to give Barker some snaps after an injury. Whatever the case, Johnson returned to rally the Wildcats with two touchdowns for a 27-16 win to improve to 8-4 as the starter and 10-4 overall. That discussion appears over.

OVER-HYPED BENTLEY: South Carolina quarterback Jake Bentley said he was perhaps too excited at the start of last week’s 31-13 win at Missouri. Bentley was 7 of 14 passing and badly missed a couple of throws as the Tigers opened a 10-0 lead. Bentley went 11 of 14 including a TD pass the rest of the way in the Gamecocks victory.

CLUTCH WARE: Kentucky’s Denzil Ware remembers well his big moment at Williams-Brice two years ago, returning Pharoh Cooper’s fumble on a potential tying, two-point conversion 98 yards for a Wildcat score in a 26-22 victory. Ware recalls how quiet things got as he ran toward the end zone. “It felt good. I felt like Steph (Curry of NBA champion Golden State) when he hit the three in the fourth to silence” the crowd, he said.

RUN STOPPERS: Kentucky so far is meeting its goal of shutting down the down the run. The Wildcats rank 11th nationally with a per-game average of 58.5 yards and held EKU to just 62 last week. The Gamecocks are averaging 101.5 yards a game, 12th in the SEC.