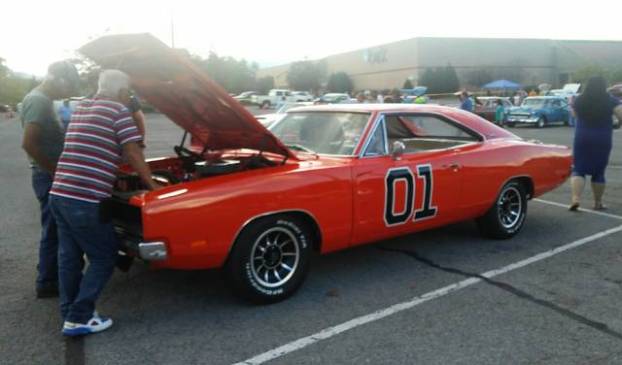 This 1969 Dodge Charger is an exact replica of the “General Lee” car from The Dukes of Hazzard.

The Middlesboro Mall was surrounded with jaw-dropping automobiles, music and family fun over the weekend as it hosted its last Cruisin’ the Crater event of the season.

Ending the season in style, the last show included live music and door prizes as well as the usual car displays and friendly atmosphere that makes the show such a beloved event.

“I always hate to see the event end for the summer,” said J.B Frasier, who displays his 1940 Oldsmobile each year. “I look forward to being a part of the show every year. It’s just full of great cars and even better people.”

The show was full of impressive automobiles, including everything from 1950s firetrucks to an autographed replica of the “General Lee” vehicle from the popular television show “The Dukes of Hazzard.” The cars ranged from classics to brand new models, with some even being custom made.

Cruisin’ the Crater began in 2003 as a considerably small event, but has expanded each year, eventually becoming a treasured show for car lovers across the county and beyond to attend each year. Often times, loyal attendants will even arrive well before the show begins and stay long after the show’s official end.

“It just gives people who share a love of cars a chance to meet together and enjoy what they love,” said the show’s director, Curt Sams.

Relying strictly on volunteers and donations, no money is taken in by those in charge of setting up the event. Instead, their drive comes simply from their love of cars and the community.

Sams, who also works as manager of the local Dixie Auto Parts, says the show is his life-long dream, seeing as how he has strived to create a car show since 1968. After years of being unable to find a venue to host the event, the Middlesboro Mall stepped in and welcomed them to their annual lineup. Serving as an exceptionally convenient location (providing several nearby restaurants, stores and restrooms), the mall now hosts the event every third Saturday from May through September.

Although they occur several times throughout the warmer months, attending only one of the shows would not give one the full experience. While the event certainly has its fair share of loyal car lovers — such as J.B. Frasier — who choose to set up every time, each show also brings in 50-100 cars that weren’t on display the last time.

Providing the event with music and announcements, Gary England volunteers his business, “Gary’s Sound Machine” to the event each year.

England has been one of the shows most faithful volunteers since the early years of the event and has spent the last 20 years setting up his sound machine at various car shows across the region. In the past year alone, he has managed to be a part of 42 car shows.

In honor of it being the last show of the year, $500 worth of door prizes were given out to attendees on Saturday, including a stainless steel gas grill. This was made possible through donations from various business in the county.

Music was also provided during the evening by local musicians, Lynn Wyatt and Mary Reed, who volunteered to perform at the last show.

Although Cruisin’ the Crater has come to an end for 2017, the annual event is scheduled to pick back up for its 15th year in May of 2018.