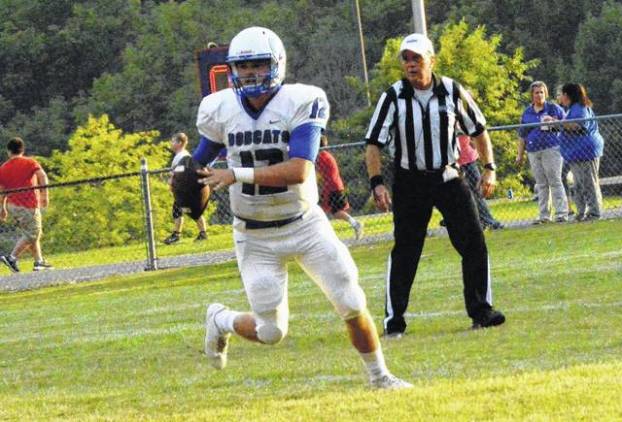 Issac Collett rolls out of the pocket against Pike County Central two weeks ago. After having a bye week to prepare, Bell County will travel to Whitley County at 7:30 p.m. on Friday.

Some may argue that Bell County’s season truly begins this week. After dispatching Middlesboro, Letcher County Central and Pike County Central with relative ease over the past three weeks, the Bobcats will square off against an opponent that is sure to test them.

Bell County will travel to Whitley County at 7:30 p.m. on Friday with their No. 6 ranking in Class 3A and their undefeated record on the line. Last year, a banged up Bobcat team fell to the Colonels 20-6.

The Dudley Hilton-led Bobcats have proved the naysayers wrong up until this point with the rushing attack garnering 852 yards. The defense has held opponents to an average of 156 yards rushing and 66.7 yards passing on the year.

On Friday, Bell County will have a chance to prove their ability against the team that pushed Corbin to the limits earlier in the season.

At first glance, Whitley County’s 1-2 record may not seem like much. Take a closer look at the schedule, and it shows just how talented the senior-laden team really is.

The Colonels started the season with a 14-0 loss against 3A power Corbin — a team that defeated Tennessee powerhouse Alcoa a week later. They followed that performance up with a 41-13 victory over Leslie County before dropping a 43-35 decision to top five Rockcastle County.

Whitley County is led offensively by their senior quarterback Dylan Wilson. To date, Wilson has 731 yards passing and eight touchdowns while completing 64 percent of his passes. He has not thrown an interception on the year.

Wilson’s two main targets in the passing game are senior wide outs Cameron Rose and Logan Lambdin. Rose paces the receivers with 325 yards and four touchdowns on 19 receptions. Lambdin has hauled in six catches for 209 yards and two touchdowns.

Dawson Swain and Colin Kidd carry the workload on the ground. Swain has rushed for a team-high 205 yards and three touchdowns this season. Kidd follows behind with 117 yards on 26 carries.

Defensively, Whitley County has allowed 663 yards rushing and 339 yards passing this year. Preston Yount and Lathen Roberts lead the team in tackles with 21 and 18, respectively. Austin Huddleston has 15 tackles on the year as well.

Rose has the team’s only interception this season.