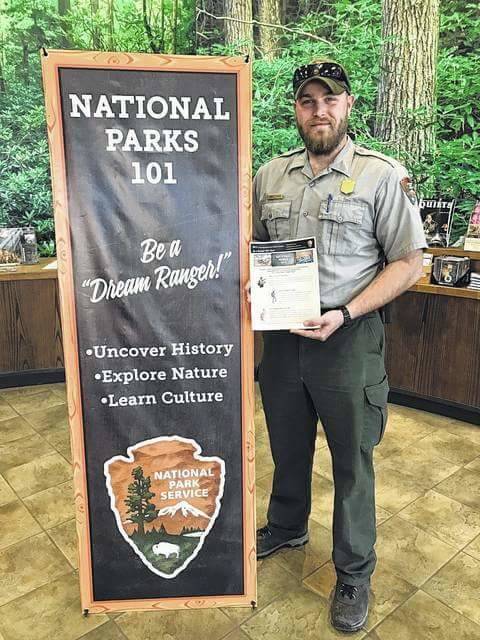 In celebration of the 101st anniversary of America’s National Parks, Cumberland Gap National Historical Park began a new program providing anyone who wishes to participate with the opportunity to not only uncover centuries worth of hidden history and nature, but to become a park ranger as well.

“Daily visitors regularly share with us how they’ve always wanted to be a park ranger. The opportunity for that is now,” said Ranger Pam Eddy.

Last year, the National Park Service adopted the motto “find your park” in order to celebrate their 100 year anniversary. When rangers and other staff members from Cumberland Gap National Historical Park began planning new programs for 2017 they wanted to find a way to incorporate the momentum. They did so by adding a new step for park-goers: “learn your park.” This lead to the development of the National Parks 101: Dream Ranger Series.

The program is divided into three different segments: “Uncover Centuries of Hidden History,” “Explore the Mysteries of Nature” and “Learn a Mountain Culture Pioneer Skill.” Visitors received a credit for each program they attended, and those with enough credits are now eligible to participate in upcoming Dream Ranger field trips hosted by the park.

The park plans to kick off the series of field trips to go with the program Sept. 16. The first destination will be the Big South Fork National River and Recreational Area. Visitors will enjoy the renowned Annual Haunting in the Hills Storytelling Festival, which will go along with the park’s culture series.

Other upcoming field trips the program plans to offer include: Obed Wild and Scenic River on Sept. 23 as part of their Nature Series and Virginia’s Highway 58, along with Wilderness Road Trail, on Oct. 7 as part of their History Series.

Contributing to the program’s Nature Series, visitors participating in the trip to Obed Wild and Scenic River will have the opportunity to view the park’s new film, as well as venture through various short trails and engaging outlooks.

While traveling along Hwy. 58, several stops will be made in order to showcase sites that played a significant role for the early pioneers’ journey to ‘Kaintuck.’ This will include places they stopped for food, lounging and additional supplies.

Participants who complete the program will receive a Dream Ranger badge during a graduation ceremony planned to be held later in the year. Therefore, those who receive the badge will then be officially considered rangers and trusted to help preserve and protect the park.

Current rangers at Cumberland Gap National Historical Park share a great understanding of the strong desire many have to become rangers. Newcomer Tom Smith is currently working on his first season as a ranger himself and travels a round trip of 2 1/2 hours each day just to make his dream job a reality.

“The cave is ridiculously beautiful. I never believed I would have the opportunity to work in an environment like this,” said Smith.

While the Dream Ranger program is currently being offered in 2017, there are still several other opportunities and paths one may take to become a park ranger. Unique programs are offered at all of the more than 400 units throughout the national parks.