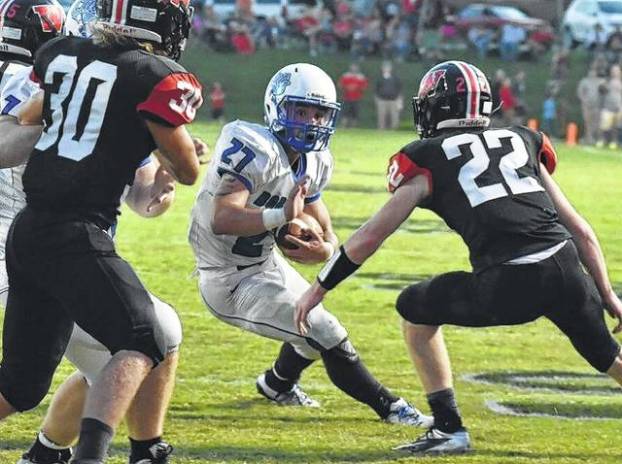 Jordan Wombles looks for a running lane during Bell County’s game against Whitley County on Friday. The senior running back ended the night with 79 yards and a touchdown on 16 carries.

Beat at their own game

In the weeks leading up to their game against Bell County, Whitley County showed their ability to be dynamic on offense. On Friday, it was the rushing attack that was successful for the Colonels as they racked up 346 yards en route to a 28-6 victory over the Bobcats.

The loss was Bell’s first of the season after beating opponents by at least 21 points in their previous three games.

The Bobcat defense struggled to contain Dawson Swain in the backfield. The senior running back ran for 190 yards and a touchdown on 14 carries. Freshman Zach Saylor also found success against the Bell defense running for 110 yards.

Dylan Wilson went 7-for-8 passing with 34 yards and a touchdown.

The Bobcats were led offensively by Colby Frazier. The sophomore ran for 116 yards on 19 carries. Jordan Wombles finished with 79 yards and a touchdown on 16 carries.

The passing game was nonexistent for Bell with Issac Collett going 1-for-11 for 13 yards. Trevor Kidd hauled in the only catch of the night for the Bobcats.

Bell County answered with a touchdown late in the first. Wombles found the end zone on a 1-yard plunge to cut the lead to 7-6 with 2:45 left in the quarter.

From that point, Whitley County took over. With 2:23 left in the half, Swain found pay dirt on a 69-yard touchdown run. The Langford extra point increased the lead to 14-6.

The Colonels scored again in the third quarter to take a 21-6 lead. Saylor found the end zone on a 15-yard run with 8:41 remaining in the quarter.

Whitley County scored their final touchdown with 7:28 left in the game. Wilson connected with Cameron Wilson on a 89-yard strike that gave the Colonels the 22-point victory.